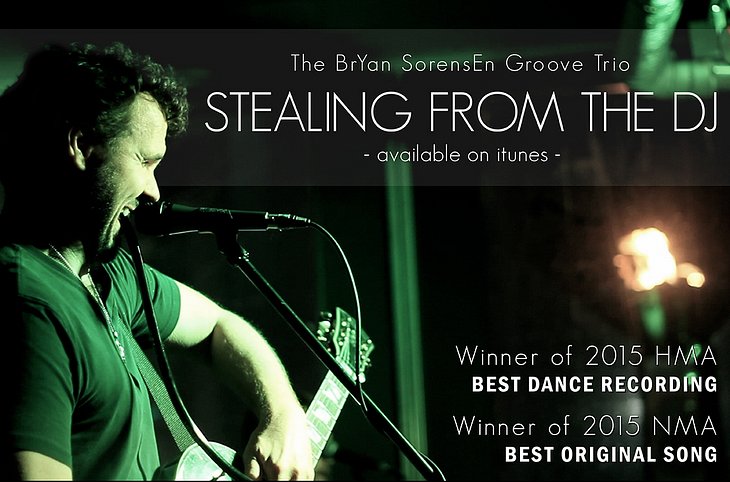 In 2012, Bryan Sorensen posted an ad on Kijiji for a bassist.  Shortly after, Jon Becker, Bryan Sorensen and Richard Hone (Bryan's long-time friend and drummer) found themselves performing in Hamilton's local live music scene (as well as a notable performance at St. Catharines' Grape and Wine Festival).

In May 2013, Bryan was called to sit-in with the Copacabana's house band (Toronto's elite groove makers Shamakah Fatback and Rich Brown).  That evening, the club owner permanently hired Bryan to fill a residency position at the club.

Throughout 2013, Bryan performed regularly at the Copacabana with the 'Groove Trio as well as LMT Connection's Mark Rogers and John Irvine.

It was during this time, that Jon and Rich's groove making abilities became very synchronized with Bryan's signature guitar talkbox playing style.

In September of 2014, ready to record, the 'Groove Trio  performed at B Town Sound Studio in Burlington Ontario.  Engineered by Justin Koop and produced by Joel Parisien, 'Stealing From The DJ' was recorded (mostly live-off-the-floor) in one afternoon.

Following the release of their first E.P., the 'Groove Trio   was invited to perform in Niagara's T.D. Jazz Festival and to headline St Catharine's Twilight Jazz Series.

In July 2015, after months of steady bookings and electric performances, The BrYan SorensEn Groove Trio returned to B Town Sound Studio to record their second E.P.

On October 16th 2015, 'Electronic Love' was released.  In May of 2016, the Hamilton Music Awards nominated the track 'Clarity' for "Best Rock Recording".

The 'Trio's performance at the 2016 NMAs was considered one of the evening's highlights.  Reporter John Law wrote, "The Bryan Sorensen Groove Trio turned the former church into a dance hall."

In December 2016, the 'Trio completed a live-off-the-floor video shoot at B Town Sound Studio.  Video recorded by Scott Levely, the goal was to document the band perform some of their hit songs, live.

Beginning in February of 2017, the "B Town Session" videos were released sequentially...  Bryan: "People that have heard the recordings, need to see us perform these songs live...".  Buy the end of 2017, Bryan had performed 135 live shows.

2018 proved to be another busy year.  There were twenty-one shows at Niagara's Spyce Lounge and eight sit-in shows (filling in for Leroy) with LMT Connection.  At the end of the year, Bryan performed 95 shows.

In the Fall of 2019, the Niagara Music Awards nominated Bryan for two awards:  Adult Contemporary and Original Song of the Year.  The 'Groove Trio continues to promote and perform original material at the Copacabana, various clubs, musical establishments and festivals.